While similar in construction to the Stogi, this tonearm incorporates a conical tube and the vertical bearings have highly damped brass housing. A conical tube is machined from solid aluminium rod which has built in precise azimuth adjustment worm drive mechanism.
Tonearm geometry, bearing, wires and other parts are the same as Stogi and effective mass differs only slightly.

General description:
This is a very rigid medium mass tonearm with  precision ball bearings which, while withstanding very heavy loads, displays extremely low starting and running friction and noise levels. The main frame and all other parts are machined from solid aluminium and brass blocks. Some parts are anodised and some are not, in order to help control tonearm resonance. The headshell provides a stable cartridge mounting, while the internally damped tube connects this to the massive bearing parts where any vibration or noise is dispersed. Most parts are glued together for rigidity and damping.

The conical tube machined from solid aluminium rod is internally damped and divided into two parts which, while further aiding damping, also allows for precise azimuth adjustment. A special mechanism (worm drive), using an  Allen key, allows the tube to be rotated back and forth in minimal increments with no air gap. This mechanism is submerged in silicone grease for further damping. A marker line clearly shows the azimuth position and facilitates use, while allowing for repeated adjustments.

A decoupled brass counterweight controls balance and adjusts tracking force, while damping vibration in the tube. The massive arm base serves to clamp the tonearm rigidly to the armboard. All bearings are pre-loaded and glued into position which, while damping vibrations in them, also provides long lasting, zero play, low friction and low noise level in the bearings. VTA adjustment is made by raising or lowering the tonearm in the arm base itself.

Wires are in one length from cartridge pins to RCA connectors. High quality wires are incorporated into our own cable. It is also possible to use the tonearm in a balanced ( XLR) or 5pin configuration. 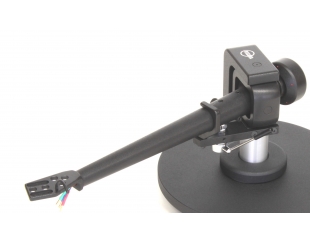